We may be stepping outside the triathlon realm with our SRfive aero road platform, but we've certainly earned the accolades of the road category. Road Bike Action Magazine recently road-tested the SRfive, and came away with positive feedback. Read their review below, or click here to read it at their site.

Quintana Roo has 30 years of racing pedigree, specializing in world-class triathlon and time-trial bikes but only a handful of ventures into the drop-bar category. 2020 marked QRs first attempt at a modern, aero road frame, disc brakes and all.

Quintana Roo started with the goal of redefining what they call the “Super Road” category. It’s essentially what we’ve been calling a modern road bike. Think aero-influenced tube shaping, 30mm-plus tire clearance, and of course disc brakes. The carbon SRfive frame is the result.

A 99.7cm wheelbase is paired with a 72-degree head tube angle on our size medium. Quintan Roo wanted to emphasize road bike precision handling instead of their typical time-trial style designs. The 56.5cm stack and 38cm reach on our size medium create a relatively upright endurance style position in the saddle. The frame has a maximum recommended tire clearance of 32mm.

Quintana Roo claims a size medium frame weight of 1175 grams, including all of the factory bits like derailleur hangers, bottle bolts and paint. While this is heavier than bikes we’ve recently tested, especially the sub-700-gram Specialized S-Works Aethos, the SRfive is on par with other aero frames like the 1200-gram Cannondale SystemSix and the 1280-gram Giant Propel disc.

Following the trend of other consumer-direct drop-bar brands like Sage Titanium and sister company Obed, Quintana Roo allows customers to personalize their builds piece-by-piece throughout the checkout process. Six wheel options can be matched with four Shimano drivetrains, 105, Ultegra, Ultegra Di2 and Dura-Ace Di2 with two power meter options from Rotor available as well. Thanks to their in-house paint program Quintana Roo offers 12 frame colors with over 20 different logo designs which can be chosen during this process.

QR supplied an Ultegra Di2 drivetrain for this build. Mid-compact chainrings are paired with an 11-30, 11-speed cassette. We were pleased with the wide gear ratio, it’s a pleasant change for us to see Shimano spec increasingly more stock drivetrains with an 11-30 cassette rather than a 28 or less. Quintana Roo made the peculiar choice to use dual 160mm rotors. It’s a rather outdated spec which should be updated to 140mm rotors to save the unnecessary weight.

Hed Vanquish RC4 wheels give our test bike a performance edge over the other less expensive SRfive builds. The carbon rims are 40mm deep and have a 21mm internal rim width. The 25mm Continental Ultra Sport tires measure just over 28mm at 70psi. One of our first upgrades would be a pair of high-performance, wider tires like a set of 28mm or 30mm Continental Grand Prix Four Seasons.

FSA and Vision Tech USA create the alloy cockpit with an ACR stem and a Trimax handlebar. Hydraulic lines and Di2 wires are hidden in the front end only to be seen at their respective calipers and derailleurs. On the surface, it may appear that there are few options to easily upgrade the stem, in part due to the internally routed design of the FSA stem and gated spacers below. A standard 1-1/8 inch steerer tube is hidden as well which allows for most stem combos but note, you’ll need to swap the spacers at the same time. 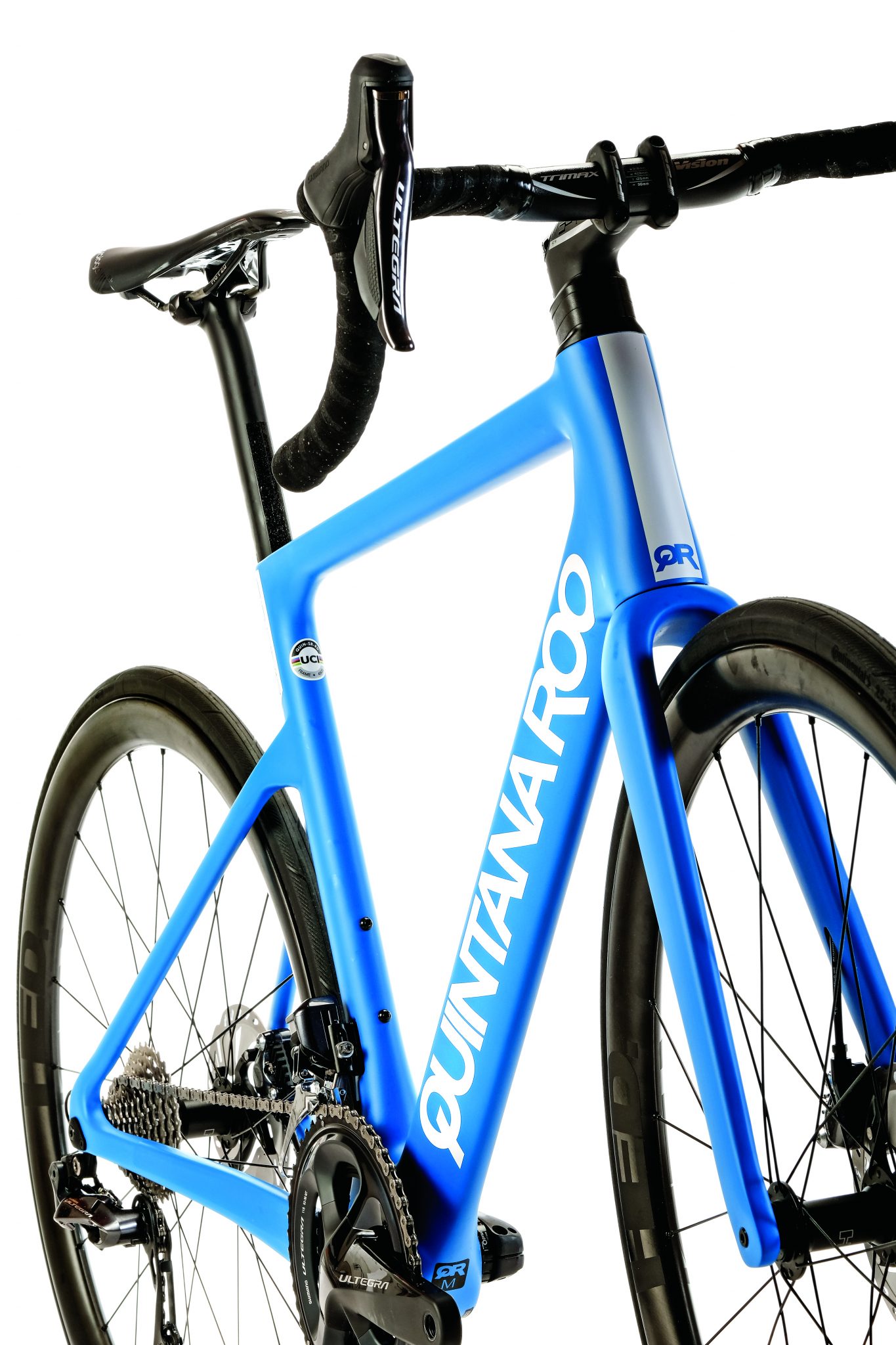 Quintana Roo’s first go at a modern road bike is a well-rounded effort out on the road. In the saddle, the Quintana Roo is noticeably compliant and encourages an upright riding position. The SRfive garnered numerous compliments on group rides and was a reliable conversation starter, “Yes, the longtime triathlon brand finally has a solid offering for the road.” we explained numerous times as people did a double-take of the downtube.

At speed, the SRfive is nimble thanks to its 99.7cm wheelbase and 72-degree head tube angle. Slight inputs on the handlebar direct the bike where it’s intended. The handling is stable and predictable but in a way that pairs well with the responsiveness just mentioned.

Road chatter is absorbed well due to Hed wheels and the lower tire pressure that’s promoted by the 21mm internal rim width. We rarely surpassed 70psi during our testing (as recommended by the tire pressure chart sticker on the rims).

Steep climbs were a challenge on the SRfive. Being in the 30×36 gear made us envious of SRAMs 33-35 gearing that’s available at a similar gear ratio in the 12-speed AXS line. Considering the 18.60 pounds our build weighs, we were left longing for more weight savings.

Get to Know Us: Quintana Roo CEO Peter Hurley

It's not just about the bottom line. For Peter Hurley, running Quintana Roo has been a passion play that may have saved his life. Get to know the man who QR founder Dan Empfield calls "the smartest exec in the bike business."
Read More

Making the Most of It: The 2020 Quintana Roo Year in Review

Can we get a heck yeah? 2020 is behind us! But while we're happy to look forward, there was a little racing last year—and a lot of inspiration. Read on as we look back in Quintana Roo's 2020 Year in Review.
Read More

Jeanni Seymour is one of the winningest Ironman 70.3 racers on the pro circuit. With a new Quintana Roo PRsix2 in her quiver and a unilateral focus on performance in a two-person pro family (alongside husband Justin Metzler), how does she plan on attacking the 2021 season? Read her story in our blog as we welcome Jeanni to the QR family!
Read More

Our sitewide sale on all bikes and QR swim products ends today! Plus if you choose Home.Delivery.Right shipping at checkout, you will receive a FREE HYDROfive wetsuit!

*Home.Delivery.Right is only available to certain states in the US. To receive your free wetsuit, please add your size in the notes section of your order. No need to add to your cart/order!